Let’s dispel a myth today. We will do my personal favorite: “Nowadays everybody has internet” aka “you can get free wifi anywhere.” Talk about fake news. The Pew Group, one of the nations leading polling groups recently released a study that shows while lower income Americans are slowly bridging the gap on the digital divide there is still much work to be done to close it. Approximately 53% of families that make less than $30,000 have broadband internet service and only 63% have a smartphone. People argue they see “poor” kids with smartphones everywhere but it’s likely that they are older phones without data plans and use any free Wi-Fi they can find.  When you work in small town America but live in a big city as I do, you see this divide in action. When my broadband access goes out at home I can scan four or five other Wi-Fi signals, some unwisely unlocked. Yet in the town where I work you may have to get in your car and drive to the library to get Wi-Fi for free.

The stigma attached with not having a smartphone or internet service is deep and more crippling than you might think. While a commonly regurgitated myth states 80% of all jobs are only attained online has been debunked it is true that that is where over 80% of all jobs that are advertised are being advertised.  Look at any newspaper today and compare it to one from the 80s and you will see it.  This is why we offer mobile hotspot lending at my library. We want to help close the gap. A better job that might be found online from the comfort of your home today could mean you can afford broadband service tomorrow. Until then you can borrow ours.

Recently we had a patron come in to get a hotspot for his job. He delivers pizza. He has a smartphone with a GPS app but no data plan. He said he saves a lot of time and money using our hotspot in the car with his phone. He saves on gas and avoids bad routes which save him time. He delivers almost twice as many pizzas as other delivery drivers and customers request him now. He hates the days he can’t get one. He never came to the library before hotspot lending and now he’s a regular who checks out audiobooks too.

Building a hotspot lending program is easier than you think.  Mobile Beacon and TechSoup make it affordable for any library to try.  If you have no budget for it consider applying for a grant. Perhaps just look closer at your materials budget. Maybe you can be more selective in your physical materials or downloadable budget. The average cost of four audiobooks covers one hotspot for the year, and Hotspots can be purchased on just about any budget. If your fear of losing the device or having it stolen by a patron is what’s stopping you, you can just notify Mobile Beacon and  they can turn it off with the click of a mouse, anytime and for free. You have more chances to recover a stray hotspot than you do regular items. My little rural library has 21 heavily used hotspots in circulation and as we approach the second anniversary of our program, and have never had a hotspot stolen. So what are you waiting for?  Learn more about the Mobile Beacon donation program with TechSoup and get started today! 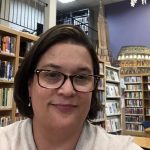 Maria Meachum Graduated from Dominican University in 1996 with her MLIS and has been a public librarian ever since. The last eight years she has been the Director of the Wilmington Public Library District and has met her goal to offer one new exciting service each year. In May of 2016 she started a HotSpot Lending program which is one of the largest in Illinois.  She’ll teach you how to afford it and how to embrace the popularity monster it will become.

On Page 2, order the number of 5G devices at 20% off, needed to replace your eligible 4G devices. You will need to purchase a service plan because 4G service is not transferable. Once your order is complete, Mobile Beacon will reimburse you for any unused months of your remaining 4G service.

On Page 2, order only the device(s) that are currently available for replacement.

We will reach out to you directly with a personalized offer for your devices. Stay tuned!! We are committed to providing you with the highest quality service to support your mission.